Knee injuries are common, especially amongst football players.  The most frequent knee injury is that to the anterior cruciate ligament (ACL).  In football, the knee is subject to a considerable amount of force being transmitted across it throughout a game.  The knee is supported by the lateral collateral ligament (LCL), medial collateral ligament (MCL), posterior cruciate ligament (PCL) and the ACL.  The ACL is one of the main supporting ligaments of the knee, it provides an amount of rotational stability to the joint (see image below).  The ACL attaches the femur (thigh bone) to the upper surface of the tibia (shin bone) in a diagonal direction through the knee joint. 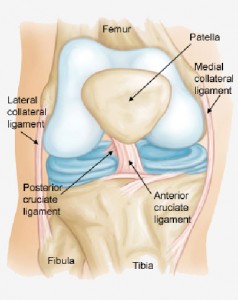 Literature suggests that ACL injury usually occurs when the athlete’s leg is in a forced valgus position, with the knee flexed and a degree of internal rotation of the femur on an externally rotated tibia, which will be fixed to the ground by the football boot.  However, other research suggests that ACL injury is usually non contact with rapid deceleration and maneuvers requiring a sudden change of direction, and one-foot stopping and landing.  The ACL can also be torn when the leg is forced into severe hyper-extension, beyond that normally allowed by the knee joint.  The athlete usually experiences a “popping” sound or a feeling of the knee “giving way”, it is very painful and swelling is usually present.  This is supported by research that analysed football players with an ACL rupture and concluded that the majority were caused through none contact, it also suggested that goal keepers are at an equal risk of this injury.  Many studies also conclude that ACL injuries are more common in females than males.  The reason for this is not yet known and varies in the research from differences in anatomical structure to the effect of oestrogen on the ACL.

Research agrees that to treat ACL injuries surgery is usually required.  A number of factors determine the decision on whether to operate such as, the athletes age; lifestyle; sporting involvement; occupation; degree of knee instability and any other associated injuries.  It is unlikely for an older person, who is less active and perhaps injured their ACL following a fall rather than during sport to have surgery.  A younger, fit person who regularly plays sport and would be more likely to adhere to a complex rehabilitation program is very likely to be offered surgery.  Following surgery it is recommend that rehabilitation should consist of strength training exercises, proprioceptive exercises, and possibly agility training.  The athlete may also be advised to wear a supportive knee bandage.  The literature concludes that recovery time will vary amongst individuals, depending on the surgeon and physiotherapists approach to rehabilitation.  It is also thought that individuals with no associated tears or injuries are the quickest to return to play, whilst those with associated injuries took longer.

Prevention of ACL injury is quite difficult.  It is believed that correct footwear can prevent ACL injury, it is also important to get an even balance between hamstring and quadriceps strength and reaction time.  Strengthening the muscles surrounding the knee is vital for both prevention and rehabilitation of ACL injury.

This website uses cookies to improve your experience while you navigate through the website. Out of these, the cookies that are categorized as necessary are stored on your browser as they are essential for the working of basic functionalities of the website. We also use third-party cookies that help us analyze and understand how you use this website. These cookies will be stored in your browser only with your consent. You also have the option to opt-out of these cookies. But opting out of some of these cookies may affect your browsing experience.
Necessary Always Enabled

Any cookies that may not be particularly necessary for the website to function and is used specifically to collect user personal data via analytics, ads, other embedded contents are termed as non-necessary cookies. It is mandatory to procure user consent prior to running these cookies on your website.