This is often referred to as runners’ knee or can be called anterior knee pain. Symptoms usually come on gradually and worsen over time. In a runner, the many phases of the running technique will need to be analysed to identify errors that may be causing the condition. The literature explains that patellofemoral syndrome is caused when the foot pronates past the point of mid-stance and when it pronates too much, which in turn causes the lower leg to internally rotate excessively and for too long.

The pronation continues into the next phase, where the knee reaches maximum flexion and the quadriceps cause a pull on the patella that attempts to move that bone laterally. This pull means the patella is forced to slide over the lateral femoral condyle, instead of being pulled naturally within the groove between the femoral condyles. In simple terms this means that the patella does not track correctly in the grove as it is supposed to. As a result inflammation occurs to the cartilage under the patella (see image). 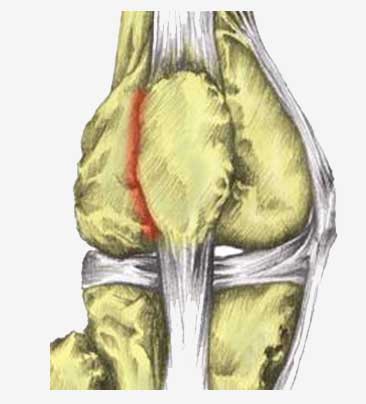 The mal-tracking of the patella is usually caused by weak or tight muscles surrounding the joint, resulting in an imbalance. As these muscles act together the load will not be evenly shared between them, meaning the patella will not run in a straight line within the intercondylar groove formed by the Femur and Tibia. A common example of this is that the lateral muscle groups are tight and the medial muscles are weak (usually the vastus medialis oblique). As we bend and straighten the knee, the tight lateral muscles cause a pull on the patella and the weak medial muscles are not strong enough to control the force.

Treatment for this injury starts with RICE (rest, ice, compression and elevation) after activity and a knee brace may also help. There are a variety of knee braces available that specifically support the patella to aid with tracking. Massage to the tight muscle groups and strengthening of the weak muscle groups will also help the patella to track correctly. Past research suggests that if left untreated it can produce a degeneration of the patella, also as a result this condition can cause problems in other parts of the body such as the back. Posture may be affected and gait analysis will need to be carried out. This will occur in the rehabilitation stage where training programmes will be looked at along with running surface, running shoes, and the need for anti-inflammatory medicine. In some cases orthotics may be prescribed to help control pronation. Surgery is considered a last resort and is rare.

This website uses cookies to improve your experience while you navigate through the website. Out of these, the cookies that are categorized as necessary are stored on your browser as they are essential for the working of basic functionalities of the website. We also use third-party cookies that help us analyze and understand how you use this website. These cookies will be stored in your browser only with your consent. You also have the option to opt-out of these cookies. But opting out of some of these cookies may affect your browsing experience.
Necessary Always Enabled

Any cookies that may not be particularly necessary for the website to function and is used specifically to collect user personal data via analytics, ads, other embedded contents are termed as non-necessary cookies. It is mandatory to procure user consent prior to running these cookies on your website.